We interrupt the ongoing Loss series to bring you a special, two-part #Pride event I was not planning to make. It takes a hearty serving of gloom-and-doom to produce the second and third parts of Loss. Recent developments, however, briefly pushed me in the opposite direction. That’s over now, surely enough, so they still may or may not come. But this entry, on the other hand, could not be stopped – bile seldom can be.

I originally meant to release a mea culpa about the dark side of the rainbow and my participation in it, first. That’s still coming, since it was drafted nearly in its entirety right after Pride Sunday. [Update: it’s here!] But I saw something today that enraged me in such a way that it walloped my introspective lens outward, toward the realest of enemies. Know right now I wrote this in the deepest of ires, so it’s an ugly rant. I tried to bring the heat down in editing, but I’m far too angry still.

This is what I saw:

Hi. I’m @AlbertoBelaunde and this is what I frequently get for being gay. [pictures of homophobic slurs and death wishes via retroactive terrorism and/or AIDS!]

Seeing this, I feel no fucking pride in being from this cess pool of a country. None. You can particularly take your World Cup bullshit and shove it up your god-fearing assholes. I had been trying distinctively hard not to shit on your delusional parade, but as far as I’m concerned this racist, classist, homophobic, woman-beating place deserves not a second of joy.

Why am I so livid, beside the obvious? Because I have been away from that toxic swamp for three years and am a better man for it. I suspected little or nothing would change in my absence in regards to LGBTQ+ rights, or even human rights, but being confronted by reality unchanged feels very, very different. It cuts even deeper now that I know I’ve run out of options and time. I may be in New York but it is still Trump’s America. Want it or not, they’re still under his children-caging thumb. Under this administration, the likelihood of me finding a job in the US has gone from «difficult» to «miracle-adjacent». I’m too much of a hassle now, experience be damned. Fuck my drag, right?

If you got a little lost in my rant, let me confirm that, yes, I did say I am going back to Peru. I hope to return to New York as soon as humanly possible, but for the time being, this is it. I still can’t bring myself to book that flight just yet, though. I’ll probably just do it over the weekend when I’m good and drunk. We’ll see. However, knowing this bullshit is what I have to look forward to makes me wanna jump off the Greenpoint Avenue bridge. That doesn’t sound very dramatic ‘cause it’s a small, lesser known bridge, but it’s right here. I will not be inconvenienced by my own suicide. What would be the point.

I am aware there are good people in that marsh; all of my gay friends fighting the good fight, all of my straight friends raising better children. You will all be a sight for sore, bloodshot eyes. But I’m not an optimistic person by nature, I have to squint harder to see the glass half full. And right now all I see is you’re a crystalline drop in a mop bucket and it crushes my soul. Here, I am a double minority – and this city’s not without its homophobes or racists, but «the people» have your back. Not just your people, but all people.

No one has ever harassed me in any way here, but I’ve seen it happen and each time there’s been a far larger and louder chorus shutting that shit down. Assholes are the real minority when you can trust a multitude of total strangers to stand up for you, for what is right. Reading those tweets my friend – an openly gay congressman, for fuck’s sake – received, reminded me what being a minority truly feels like. No chorus behind you, a few scattered voices if you’re lucky. The assholes are impossibly crueler and louder in Peru.

I wrote this in English because I’m sick of hearing about the strides #Peru has made. Oh, the food! Oh, the culture! Oh, the economy! Oh, how they’ve turned themselves around! They have not. I have never publicly contradicted anyone saying good things about my country, because I don’t wanna be that bitter bitch, but you know what? I will be that bitch today. Food’s great and Machu Picchu is as impressive as ever, but it is still the home of wife-beaters, female reproductive rights-deniers, horror movie-level femicide (with a side of presidential ignorance, so you can gauge just how backwards it all is), toxic/idiotic masculinity and this fucking bitch: 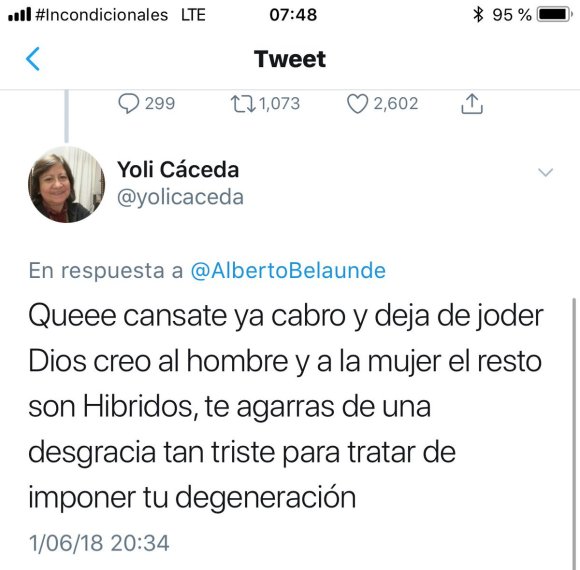 Whaaaaat? Tire yourself already, faggot, and quit your shit. God created man and woman, the rest are hybrids. You latch on to such a sad tragedy to try and impose your degeneration.

[edited for clarity because she’s an illiterate piece of shit. One comma and it’s in the wrong place, FML]

If you’re wondering why I single this monster out, my answer is threefold. One, I expect this from chauvinistic, toxic males. But I am always especially sicken when it’s a woman spouting their trash. Two, the contrast between her smiling grandma avatar and the sewage in her tweet. Three, she revealed strategy and hope in a single line: tire yourself already. This is what they do, they oppose resistance so we, the faggots, get tired. They’re an unmovable mass we, the faggots, must keep pushing for the right to live. And it stroke a deep chord in me BECAUSE I DID GET TIRED. Thirty years of this bullshit, I GOT TIRED AND I LEFT AND I’VE BEEN MY HAPPIEST, GAYEST SELF AND NOW I HAVE TO GO BACK TO SEE YOUR FUCKING FACE, YOLI, AND HEAR YOUR FUCKING BULLSHIT ECHOED IN ALL THE OTHER HOMOPHOBES THAT GOT YOUR BACK AND NEVER MINE.

Oh, but watch out, bitch.
Unless this post substantiates my petition for political asylum, I am coming.
And. I. Am. PISSED.

Sass on the go!